Right people, we are de-shaming periods. Periods are a normal and natural part of being a woman or person who menstruates. Yet many of us (most?) have been conditioned to feel shame about our periods.

In this article we want to celebrate the ups and downs of periods. Traditionally, bleeding all over your white jeans or on the sheets of a one night stand ‘should’ be embarrassing.

They are stories that we are supposed to feel embarrassed by, but we've decided to bring them out of the shadows of shame and into the open. Because periods are NORMAL.

This is part of the ongoing work to undo the shame we have been conditioned to feel. It's an ongoing effort for lots of us.

So here we want to share and celebrate those stories, to be open and talk frankly, so that the next generation don’t feel so shameful.

If you have a period story you want to share, please email hello@wearedame.co

Leandra Cohen, founder of ManRepeller, recently posted to Instagram of her white skirt covered in period blood. The caption read:

‘Unsarcastically, I love being a woman.’ 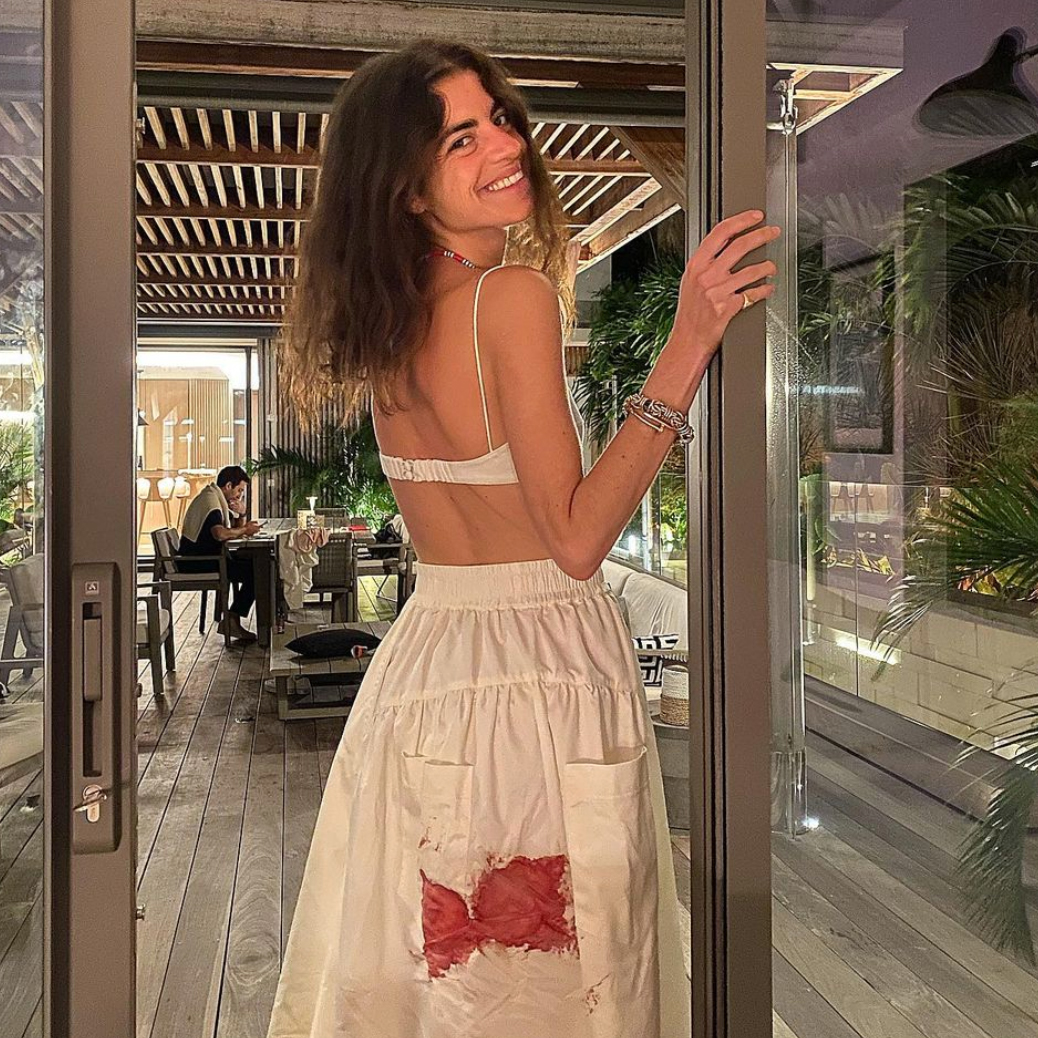 Mandu Reid, leader of the Women's Equality Party and candidate for the 2021 Mayor of London race.

In my early days when I was a rookie menstrual cup user, I learnt the hard way. Never cut corners with washing your hands after you’ve been cutting chillies in the kitchen and then change your menstrual cup. In this day and age we are way more vigilant about washing our hands but that time I didn’t.

Chilli burn is not something I would recommend. Honestly it was hours and all I could do was ride it out. So, I strongly advise against that situation.

On the way to a Trade show in Cologne two weeks into a new job with my (male) boss, I started a very unscheduled and heavy period on the plane. The shops nearby only sold light or regular tampons as period care options, so I ended up having to use toilet roll as back up for two days walking around an exhibition centre. I haven't travelled without a box of tampons since.

There is a developed lack of shame; you have to work at it and it’s very context-dependent. There are still elements of shame, absolutely. I was at, obviously, a small period conference in Berlin, and I had just come on my period, probably the heaviest it had ever been. The toilets were in cubicles but the sink was in the main area where everyone was having their break. I had to empty my cup but I managed to get blood all over my fingers. It wasn’t one of those times where you could just wipe it off with a toilet tissue, I really had to wash it out. I just thought, right, if I can’t do this now, when the hell am I going to be able to do this? So I marched over to the sink, washed out my cup, washed my fingers and marched back into the toilet and put my cup back in.

I don’t even know if anyone noticed but I felt like it was something. Five or six years ago I would have died if anyone had seen a tampon in my bag and there I was washing my bloody fingers. But it was a period conference, quite an open minded crowd, but it does go to show that you have to be quite active with yourself in terms of ending that shame. It doesn’t just come along.

You have to challenge your own pre-conceptions of what’s disgusting to really change that.

I was in my 30's. I'd had a couple of children. I ran a period subscription company. I was doing pilates in a studio with a friend. We'd been a couple of times before but we were still fairly new. It was day two of my period and I was wearing a menstrual cup at that time. I wore leopard print leggings, an error I would come to regret not only for it's hideous misplacement in a very sophisticated studio, but also that leopard print does not hide blood stains.

The instructor asked me to do a roll over which entailed me lying on my back on the floor and rolling my legs up and over my head. I only remembered about the cup mid-roll but I had committed, there was no going back. When I rolled back down I had to do a quick covert sensory assessment while not breaking eye contact as the instructor was dishing out directions. No, it did not feel like someone had chucked a drink on my crotch. I decided to carry on and keep eye contact.

I was desperate to look down and double check but the instructor still had me in his gaze and was already moving me onto the next piece of equipment.

The reformer in pilates is akin to being in a medieval torture chamber and a puppet show at the same time. Again, lying on my back, my feet were quickly strapped into loops and I was told to do raised froggy swimming legs (crotch on full display). With the instructor standing at my feet chatting all the while.

By this stage, even though I still had not visually checked (why?) I could tell something wasn't right. It didn't take very long for him to fall silent. Then a few more minutes for him to excuse himself saying he needed the loo. I quickly checked my leggings and there it was, in full leopard-kill glory. What did I do? Nothing. I had no back-up leggings so I did the British thing and pretended it hadn't happened. Why I didn't acknowledge it I don't know.

It was only a couple of sessions after when the same lovely instructor (having never commented on the incident since) asked me what I did for a living. "Well, funny you should ask..."

I had moved across the country to a new school at the same time that I got my period. I was totally unprepared. It was unexpected and I was surrounded by a bunch of girls I had never met, you know girls at 13 years' old are awkward and really not nice. But out of necessity this was how I was able to bond with the first two girls I went to because it’s something that all girls go through and they realised that it is this shared experience that you’ve gotta help out because it’s going to happen to you one day. I would say it was definitely a very unexpected bonding experience.

I had been out surfing, which was supposed to last two and half hours but turned into five hours because of a change of plan. By the time I got out of the water I was leaking blood everywhere, literally dripping down my legs and I only had my swimming costume with a 40-minute car journey back. Some of the guys I was with thought I'd got cut on the reef and were trying to look for the cuts to be helpful. I eventually had to explain to them what had happened and it was quite mortifying because very traditional Balinese men don't talk about periods, EVER.

How to talk about periods? Just don't beat about the bush. A 21st century guide to normal eco periods.